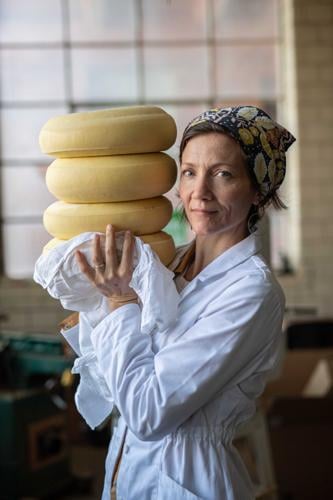 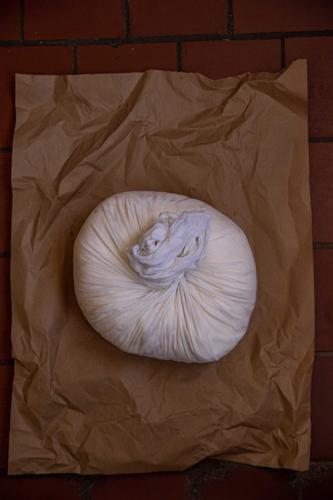 A bag of fresh curds. 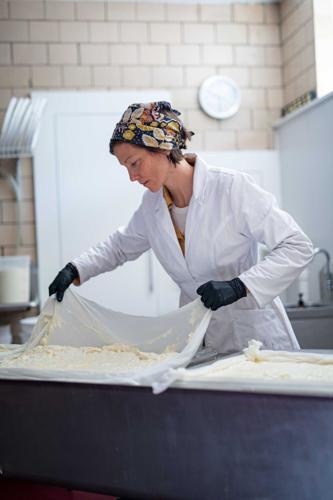 Hill separates curds from the whey. 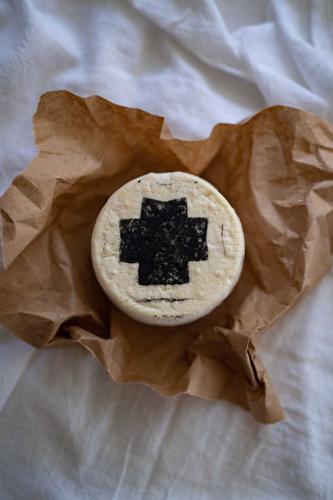 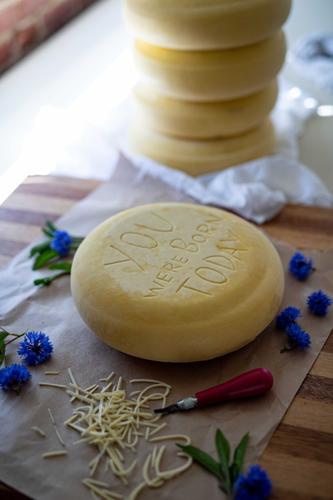 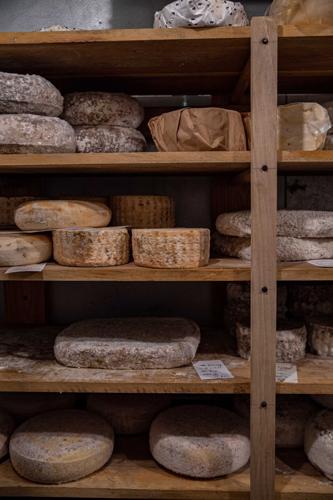 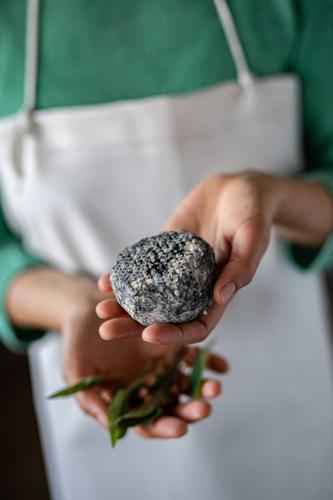 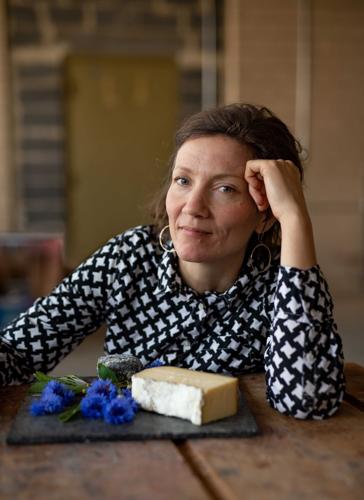 Hill has also created a variety of resources to help spread knowledge of her craft, including her book “Kitchen Creamery: Making Yogurt, Butter & Cheese at Home,” as well as a number of YouTube tutorials that walk viewers through the production of everything from ricotta to mozzarella.

The cows stare curiously at their early morning guest but soon recognize the familiar face trekking along the farm’s dirt pathway. At a time when most of us are just waking up, Louella Hill has already greeted the sunrise and is busy collecting enough milk to begin her day making cheese.

After returning to her workspace, Hill starts the process of ripening the milk with cultures so it’s ready to transform into liquid whey and solid curds – the component of milk that will later be collected, pressed, and salted before being placed inside a walk-in cooler to age until its debut.

“I love it when I crack open an aging wheel,” Hill says. “It’s a moment of surprise because you don’t know how it will turn out and you get to enjoy its released aroma.”

The Shenandoah Valley was once a sea of dairies and creameries, where butter and cheese come to life, but those vestiges of a simpler time have almost all disappeared, and the now-abandoned farmsteads and dairy processing buildings have become memories, or road-trip curiosities.

Hill is owner and head cheesemaker of Ballerino Creamery – one of a handful of small-scale ventures in the Shenandoah Valley dedicated to preserving cheesemaking traditions. Since 2019, Ballerino has churned out some of the best cheese in Virginia, much of which can be found throughout the region in specialty retailers and restaurants.

Though Hill is relatively new to the state, she has been working with cheese since falling in love with the process on an organic sheep dairy in Tuscany more than 25 years ago. After leaving Italy, Hill studied under master cheesemakers in New England, where she learned enough to teach classes and open a creamery in Rhode Island. Hill and her husband, Alan Bergland, later moved to San Francisco for his work but she continued to teach the art of cheesemaking in the Bay Area where she was fondly known as “The San Francisco Milk Maid."

In 2016, after Hill’s husband accepted a job in Virginia, the pair made their way to the commonwealth. Hill says she was immediately drawn to the Shenandoah Valley’s dairy culture. After moving to Staunton, she discovered the city’s old Augusta Dairies building and knew it was the right place to open her new artisanal cheesemaking business.

Hill’s small-batch offerings rotate throughout the year so there’s always something new. The selections depend on the season, too. In the winter, she produces more aged cheeses, which can be made in advance. In the spring and summer, softer varieties, like creamy brie and dense Swiss, make their appearance. “It’s a good way to reflect the changes in the milk,” Hill says.

Her skill and approach have earned her an ardent following. Wendy Gray of Polyface Farm in Swoope says they feature Ballerino cheeses at all of their events and farm dinners. “A plate of Ballerino cheeses and some fresh, local sourdough is a regular dinner in our house.”

Hill says the most important factor in creating delicious cheese is the cows themselves. She believes that happy, healthy cows make better milk and she says it’s important to support local farms. “It’s such a difficult business, but small family farms truly care,” she says.

Hill aims to make her company eco-friendly and offers her products in compostable papers and containers. This way, Ballerino can be a responsible steward of the land and inspire others to rethink their plastic consumption.

Hill has also created a variety of resources to help spread knowledge of her craft, including her book “Kitchen Creamery: Making Yogurt, Butter & Cheese at Home,” as well as a number of YouTube tutorials that walk viewers through how to produce everything from ricotta to mozzarella.

If you’d like to personally savor some of her imaginative batches, you’ll find the business’s stand at a handful of places around the region – weekly on Saturdays at Staunton Farmers’ Market and every fourth Saturday from May to October at Pizza Bones in Richmond.

A bag of fresh curds.

Hill separates curds from the whey.

Hill has also created a variety of resources to help spread knowledge of her craft, including her book “Kitchen Creamery: Making Yogurt, Butter & Cheese at Home,” as well as a number of YouTube tutorials that walk viewers through the production of everything from ricotta to mozzarella.