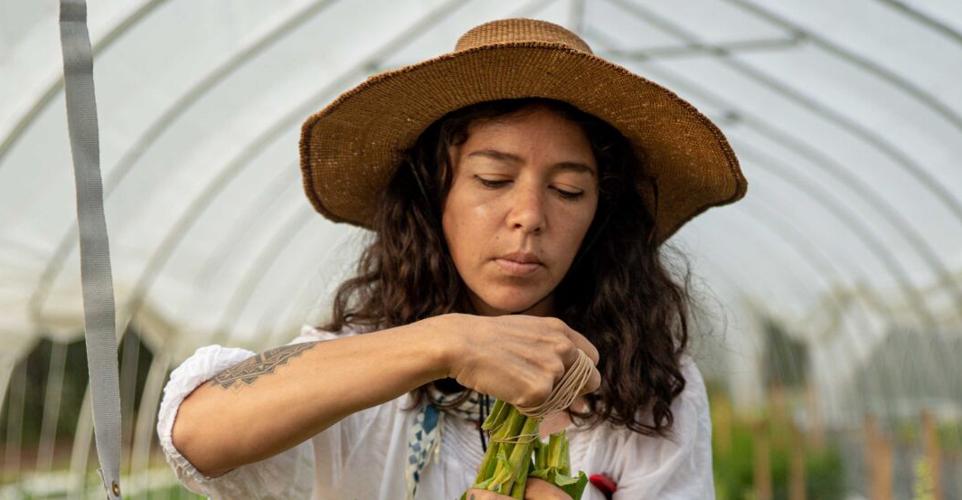 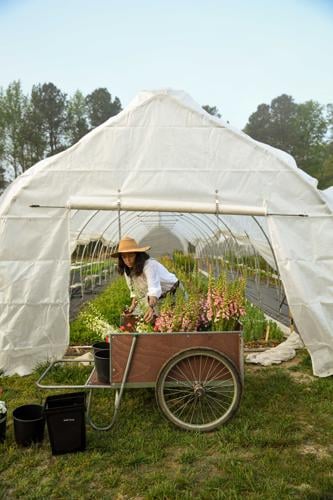 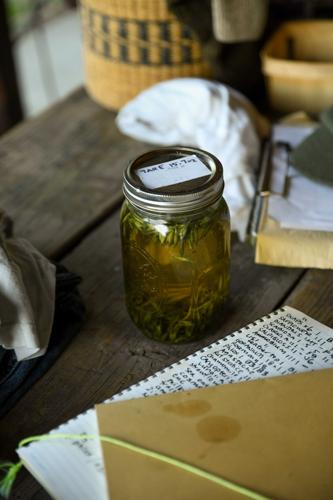 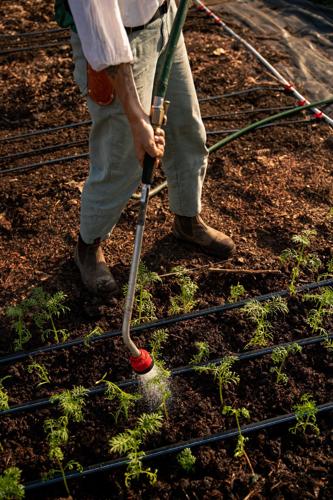 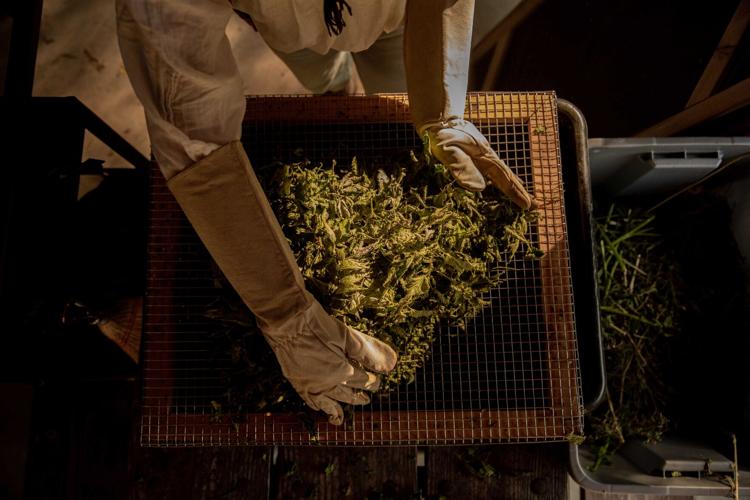 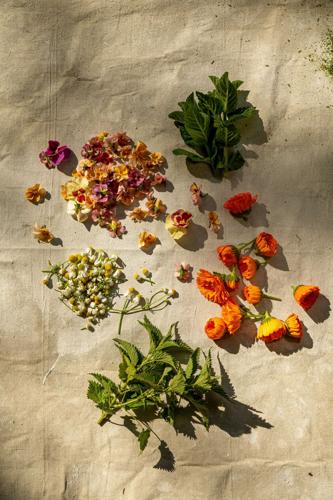 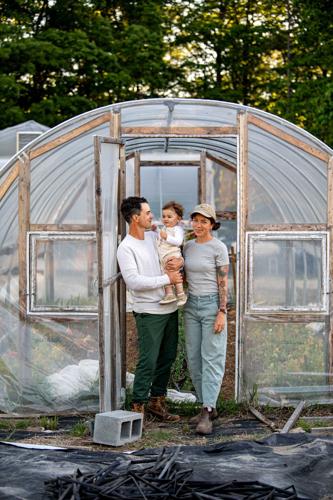 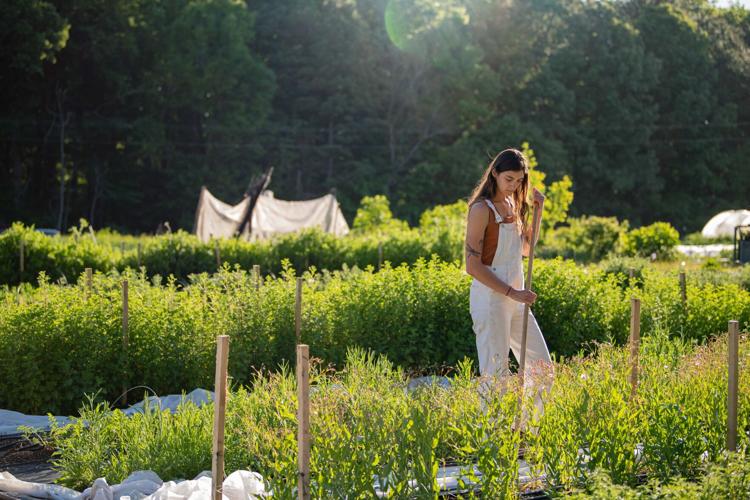 It’s a drizzly, overcast morning in May and Ash Hobson Carr is busy preparing flowers for a weekend farmers market. Clad in long sleeves, bluish-gray pants, weathered brown boots, and a khaki baseball cap, she sets off from the far corner of the Mechanicsville property on which her farm sits to harvest blooms for bouquets to be sold the next day.

Bending low to snip long stems, lower still for shorter blossoms, Hobson Carr gathers handfuls of whimsical nigella – a flower with overlapping, sky-blue petals reminiscent of a ballerina’s tutu – as well as bright yellow, orange and red poppies, a personal favorite that she has tattooed on her left arm.

“These guys have been blooming since February and have to be cut every single day,” she says, noting their season is almost at an end. “I do love them,” she adds quietly.

Aided by her professional photographer’s sensibility and business savvy, the 2010 Virginia Commonwealth University graduate has amassed more than 10,000 followers on Instagram. Her flowers and herbs can be found at Richmond markets and are delivered to doorsteps across the area. She even modeled for a Duluth Trading Company marketing campaign.

Over the course of a two-hour working tour, Hobson Carr delivers plants to her husband/co-owner in the field and mulls over bouquet color palettes. She extols the benefits of cover crops and companion planting and pulls a mason jar from the walk-in cooler she built to describe how steam transformed tiny white and yellow chamomile flowers into the cloudy sapphire-blue flecked liquid inside.

And when she finally pauses midday to nurse her 15-month-old daughter, Lou – a winsome little girl with dark hair, chubby cheeks, and enviably long lashes – Hobson Carr still appears as a coiled spring, ready to move on to the next thing.

Hobson Carr, 35, grew up in Herndon, Virginia, the second-youngest of five. Her mom had a nice kitchen garden, she says, and she and her siblings spent a lot of time outdoors – often at her mother’s insistence – picking blackberries and catching crawfish until the streetlights came on.

As a young woman, she suffered from debilitating migraines and found herself caught in a revolving door of pharmaceutical treatments and their associated side effects. She says scans and neurological exams provided neither answers nor relief, so skepticism of some aspects of Western medicine took root.

“It just felt really inaccessible, and I developed a general distrust for listening to mostly dudes tell me how to take care of me and maybe not really listening,” she says.

That was the beginning of her exploration into the concept of health sovereignty and laid the groundwork for her interest in the medicinal power of plants, although it would be a few years before it became a life-defining passion.

When she did start ordering herbs, she says, they showed up dried and sifted into Ziploc bags. But she wanted to observe their life cycle, to see what value they offered at various stages. So, Hobson Carr started growing her own medicinal plants around 2008 or 2009 and learned everything she could.

At the time, she was a successful professional photographer, but was growing tired of the sedentary aspects of her career – the long hours spent indoors, sitting, color correcting images from weddings and commercial work. She wanted more outside time, more sunshine.

"I wasn't super stoked at first," says Patrick Carr, 36, of his wife’s budding obsession, mostly because it occupied much of her free time. “She just started drinking books." But he admired her focus and drive – and she was good at it.

The couple has been together for 15 years, married for seven. Patrick Carr, or “Patch” as many call him, is a native of Mechanicsville. He’s a country boy who escaped to Richmond, where he built a culinary career. Most recently he was sous chef for Groovin' Gourmets, a full-service, Richmond-based caterer. Before that he was the executive chef at Ellwood Thompson's, a natural foods market and eatery in Carytown.

The idea that would eventually become the farm was just seeds and a plan on a spreadsheet in 2017. Two years later, Hobson Carr was in Mechanicsville preparing the land for her vision. She called it Hazel Witch Farm, a reverse play on the name of a native Virginia plant that blooms when most other things don’t.

Starting a farm is a consuming job and it dominated her life right up until she gave birth to Lou. “I had this kind of very incorrect notion that I was just gonna put Lou on my back and keep doing exactly what I was doing,” she says. “And that was shattered pretty quickly.”

An Instagram post from last spring shows an exhausted Hobson Carr breast feeding her cherubic daughter while perched on the running board of a pickup truck. “Parenting is hard AF,” the post begins.

So, Patch, who had already been helping semi-regularly at the farm, ditched his kitchen knives and picked up harvesting snips fulltime. "I left my stable salary job to come do this. We had just bought a house. We just had a kid. Most people would not just take that leap,” he says. "But I just have a lot of faith in Ash. … I really believed in her."

Hazel Witch Farm is located on the southernmost edge of Mechanicsville. The short, gently winding roadway, surrounded by a thicket of trees, leads to a gated entrance and an “Organic Farm No Spray” sign, a nod to how seriously the farmers take their stewardship of the land. Neither chemical fertilizers nor pesticides are used.

The property is in the Chickahominy River watershed. It’s a thriving ecosystem with apex predators such as great horned owls, hawks, and foxes, as well as copperhead snakes and spring peeper frogs. The farm’s hooped flower tunnels are named for resident birds: finch, heron, robin, wren, and bluebird. Hobson Carr says the way they farm is important because whatever they do impacts that ecosystem and pours down the hillside to a tributary below.

All five farmers met in the now-defunct Richmond-based, Urban Agriculture Fellowship Program. They share a service agreement with First Baptist that allows them to work their plots in exchange for tending to the church’s community vegetable garden, part of its food ministry.

“I know people say, ‘Don’t go into business with your friends,’ but it meant we had a level of trust that I really feel was necessary to be able to believe that this would be, or could be, successful,” Broder says of the decision to join Hobson Carr at Charlotte Acres.

Collectively the farmers share resources and know-how. “Our combined efforts to reach the community and connect with new markets and customers is another wonderful thing that we share here as well,” Broder says.

On the Hazel Witch plot, Hobson Carr grows the medicinal herbs she loves, but it’s the specialty cut flowers that support the business. Floriculture was Virginia’s eighth-leading agricultural commodity in 2020, bringing in about $200 million. Cut flowers account for nearly $1.2 million of the total industry.

Hobson Carr sells her flowers, herbs, and hydrosols, or “flower waters,” at Birdhouse Farmers Market on Grayland Avenue and on Saturdays at Bryan Park. Hazel Witch is one of 13 farm co-ops at River City Flower Exchange in Scott’s Addition, and the farm also offers a seasonal subscription membership.

Nothing has come easily, the couple says, but this year on the farm has been better than the last. Carr, who leans on his wife for the farming tips and tricks he’s still learning, says running a small business can feel impossible sometimes, “but you just keep doing it. And then if you really just keep pouring yourself into it, then it can work."