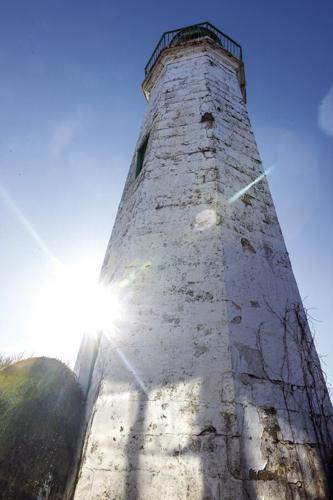 Built in 1802, the Old Point Comfort lighthouse is the oldest operating lighthouse on the bay. 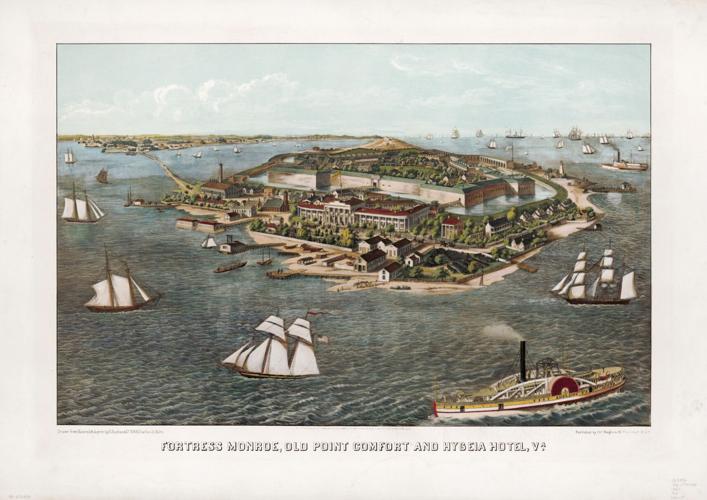 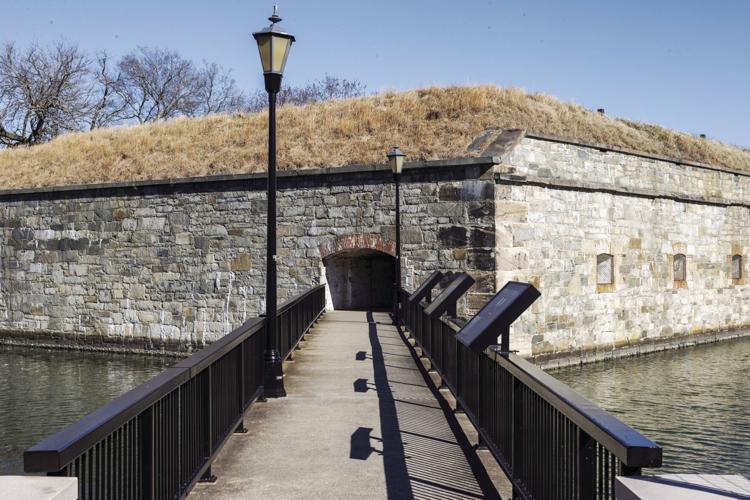 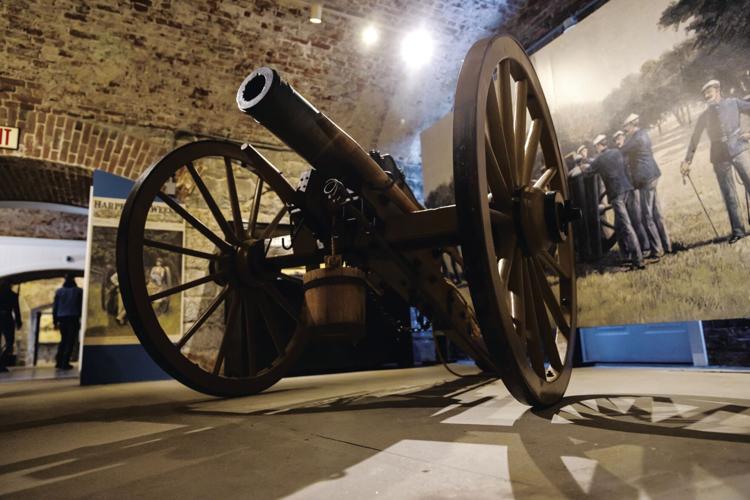 The Casemate Museum of Fort Monroe. 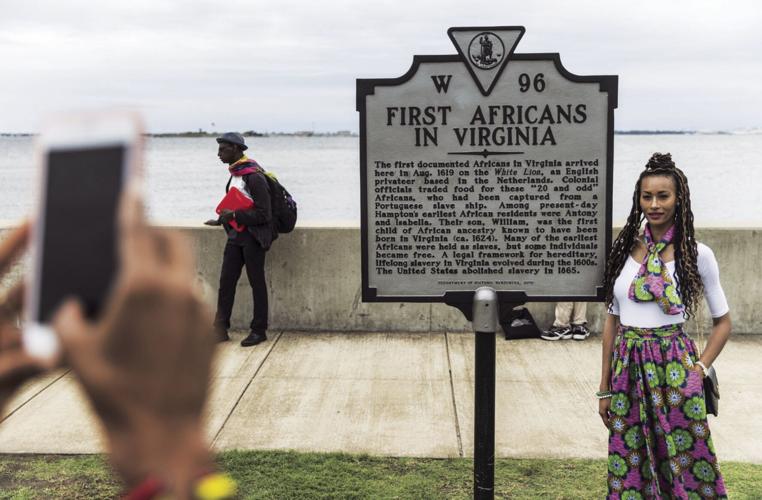 Nigerians in Tidewater Virginia commemorate the day the first Africans landed at Fort Monroe in 1619. 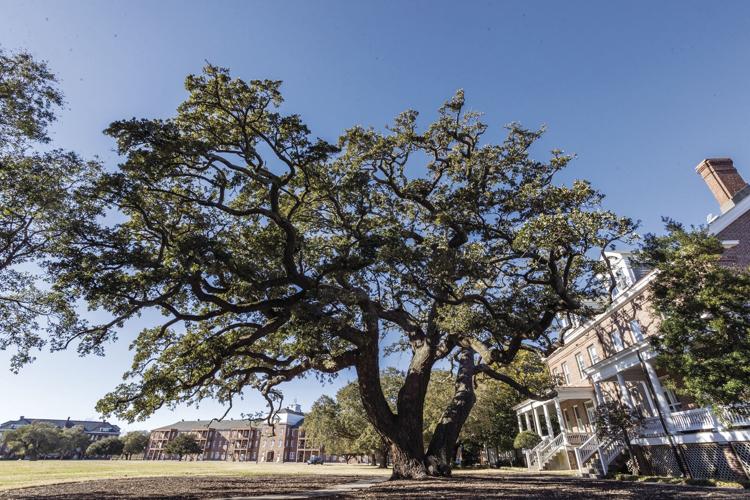 The old fort’s Algernourne Oak, estimated to be nearly 500 years old, has a crown that spans nearly 90 feet – the biggest live oak in Virginia. 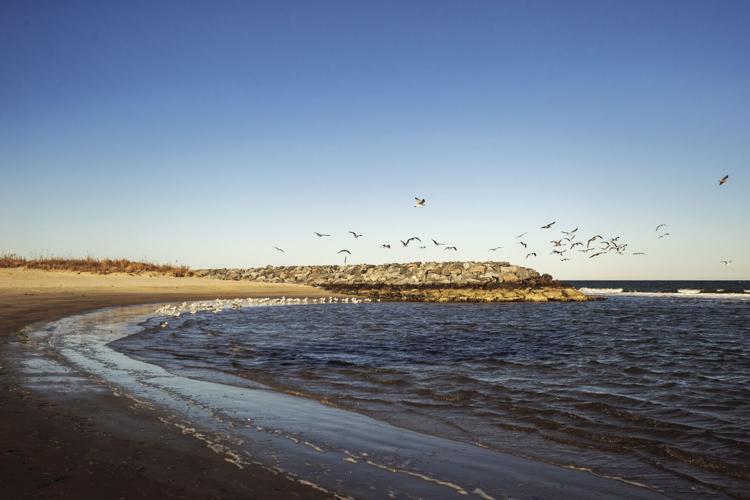 About 3 miles of Chesapeake Bay beaches lie along a boardwalk on the spit’s eastern side. The water is gentle, the beaches clean and uncrowded. 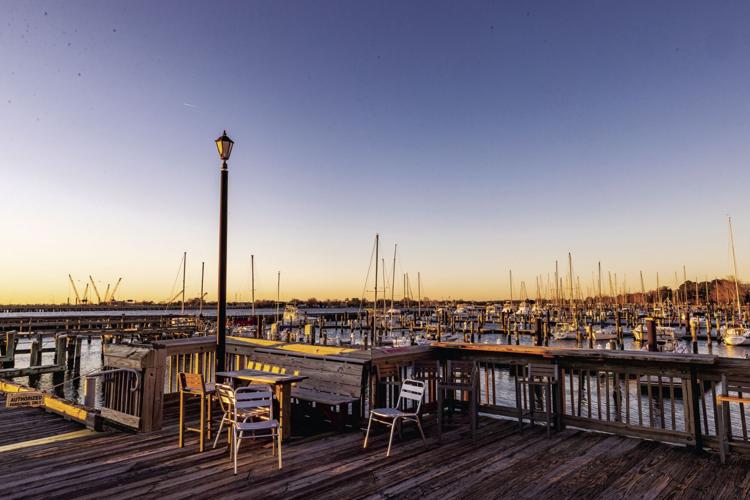 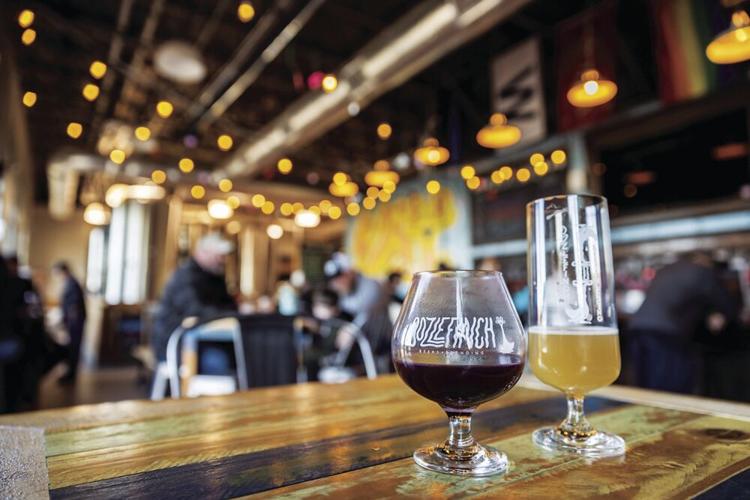 Fort Monroe is a treat by land and sea

Just 90 minutes southeast of Richmond is one of Virginia’s best-kept secrets – a place of natural beauty and national significance.

Fort Monroe in Hampton is a sliver of land surrounded by water, with gorgeous beaches, towering oaks and a four-century history linked to the beginning and end of slavery in America. The star attraction is a former Army post that’s now a National Park Service gem.

The island-like spit along the Chesapeake Bay is the last bit of land you see on the left as you drive east near the Hampton Roads Bridge-Tunnel. It’s easy to overlook.

“A lot people have driven by many, many times and were not even aware of the depth of the history or the beauty of the place,” says Phyllis Terrell of the Fort Monroe Authority, which helps oversee the site.

Count me among the formerly ignorant. A Norfolk native and longtime Richmond resident, I had surely passed Fort Monroe hundreds of times with barely a thought. Then my wife and I explored the scenic site a handful of times in recent years and fell in love with it.

Here is what makes Fort Monroe a great place to visit:

EARLY HISTORY. Many Virginians know something about Jamestown, which dates to 1607 and was the first successful English settlement in North America. But Captain John Smith and other settlers also explored present-day Fort Monroe, about 40 miles to the southeast.

Smith called the fish-hook-shaped spit “Poynt comfort,” and in 1609 the English built a wooden stronghold called Fort Algernourne at the strategic site.

The flamboyant Smith also called the area “a little isle fit for a castle,” and he was right. In the early 1800s came Fort Monroe, the largest stone fort ever built in America. It was named for the fifth U.S. president, who wanted to bolster the country’s coastal defenses. With powerful cannons, 10-foot-thick walls and a tidal moat, the citadel was dubbed the “Gibraltar of the Chesapeake.”

SLAVERY STORY. In summer 1619, two English privateers – little more than pirate vessels – attacked a Portuguese slave ship near Mexico and stole much of its human cargo. In late August, one of those ships, the White Lion, reached Point Comfort and traded roughly 30 enslaved Africans for food.

The horrific event is widely regarded as the first incident of slave trading in English North America. A state historical marker labeled “First Africans in Virginia” cites the significance.

Plans are under way for a bayside memorial that will include statues of two of the 1619 arrivals: Antoney and Isabella, holding their son, William, the first Black child born in English North America.

Terrell, who is Black, says she is inspired by the courage and perseverance of those first Africans and hopes Fort Monroe can instill that feeling in others. “If we can inspire a younger generation to learn about their ancestors, then job well-done.”

MILITARY ROLE. During the Civil War, the fort was a U.S. Army outpost surrounded by the Confederacy. Early in the struggle, three enslaved men – Frank Baker, Shepard Mallory and James Townsend – rowed to the fort at night in search of freedom. Their owner demanded their return, but the fort’s commander, Maj. Gen. Benjamin Butler, offered the men sanctuary.

After that, thousands of enslaved men, women and children flocked to Fort Monroe, which took on a new moniker: “Freedom’s Fortress.”

Well into the 20th century, Fort Monroe guarded the entrance to the busy Hampton Roads harbor. It was an active Army installation until 2011, when it became the heart of the Fort Monroe National Monument, a status similar to a national park. The monument encompasses more than 300 of the Fort Monroe spit’s 565 acres, including the 63-acre stone fortification.

STONE FORT. You can walk or drive over the moat into the fort. There, you can tour the Casemate Museum, which tells Fort Monroe’s story.

Casemates are rooms within the fort’s walls from which big guns were fired. One casemate served as a cell in which former Confederate President Jefferson Davis was imprisoned after the Civil War.

A self-guided walking tour takes you to 19th-century weaponry, elegant old houses and other attractions. There’s a modern visitors center just outside the old fort.

BEACHES AND VIEWS. About 3 miles of Chesapeake Bay beaches lie along a boardwalk on the spit’s eastern side. The water is gentle, the beaches clean and uncrowded.

“I think the beach at Fort Monroe is better than the beach at Virginia Beach,” says John Quarstein, a Hampton historian who was a lifeguard at the fort for seven years.

From the beach and higher ground you can see the bay, the Eastern Shore, the Atlantic Ocean and parts of Norfolk and Virginia Beach. “You have some of the greatest views, I believe, in America,” he says.

On a recent trip, a local visitor perched on a bench overlooking the water and talked about seeing huge container ships, submarines and even dolphins pass. Almost on cue, a Navy destroyer cruised by.

The beaches are free, but for a fee you can enjoy the Paradise Ocean Club, the fort’s former officers club. It features a private beach, seafood restaurant, fast-serve food bar and Olympic-size pool.

The old fort’s Algernourne Oak, estimated to be nearly 500 years old, has a crown that spans nearly 90 feet – the biggest live oak in Virginia. The Algernourne would have been standing when the first Africans arrived, and the tree saw historic figures such as Abraham Lincoln, Robert E. Lee and Edgar Allan Poe come and go.

Birders can spot pelicans, terns, skimmers (which skim over the water), nesting ospreys and other species.

LOCAL FLAVOR. Hampton is known for seafood, and upon entering Fort Monroe, you’ll find The Deadrise, a restaurant that overlooks a marina. Crab-stuffed salmon and seafood burritos can be enjoyed inside or on the deck.

For good coffee and sandwiches in an unusual setting – the fort’s historic 1881 fire station – consider Firehouse Coffee. And for more adult fare, the brewery Oozlefinch Beers & Blending offers creative options that pair nicely with food-truck fare outside, where kids can play on a big lawn.

An Oozlefinch, by the way, is a legendary bug-eyed bird said to inhabit Fort Monroe. Sightings seem to involve alcohol.

There are many more places to eat nearby on Hampton’s mainland.

OTHER ACTIVITIES. Check out the Old Point Comfort lighthouse. Built in 1802, the 54-foot-tall stone tower is the oldest operating lighthouse on the bay.

There are lots of places to walk and jog, and because Fort Monroe is almost an island, you can watch the sun rise and set over water. From two piers, you can catch striped bass, white perch and other fish.

Leashed pets are welcome – but not on the beach during summer.

CONVENIENCE. Fort Monroe lies about 80 miles southeast of Richmond, making for an easy day trip from the capital region. While lots of travelers drive on to Virginia Beach, that can take another half-hour – and a lot longer when the bridge-tunnel is busy, which is often.

If you stay longer than a day at Fort Monroe, there are numerous hotels and Airbnb options nearby but not on the spit itself. There is a campground at the north end of the spit.

Plans call for a 90-room hotel, restaurant and conference center at the Fort Monroe marina.

To get to Fort Monroe from Interstate 64 east, take exit 268 (the last exit before the bridge-tunnel) and follow the signs. Then you’ll know the secret, too.

Rex Springston is a veteran journalist who spent decades reporting for the Richmond Times-Dispatch, specializing in coverage of the environment.

Need to get away?

TRAVEL: Lynchburg, with its historic downtown and abundant outdoor options, is perfect for short getaways

Lynchburg has stood in the shadow of its cooler Virginia cousins, like Charlottesville and Richmond, for decades. But with the Blue Ridge Moun…

Built in 1802, the Old Point Comfort lighthouse is the oldest operating lighthouse on the bay.

The Casemate Museum of Fort Monroe.

Nigerians in Tidewater Virginia commemorate the day the first Africans landed at Fort Monroe in 1619.

The old fort’s Algernourne Oak, estimated to be nearly 500 years old, has a crown that spans nearly 90 feet – the biggest live oak in Virginia.

About 3 miles of Chesapeake Bay beaches lie along a boardwalk on the spit’s eastern side. The water is gentle, the beaches clean and uncrowded.